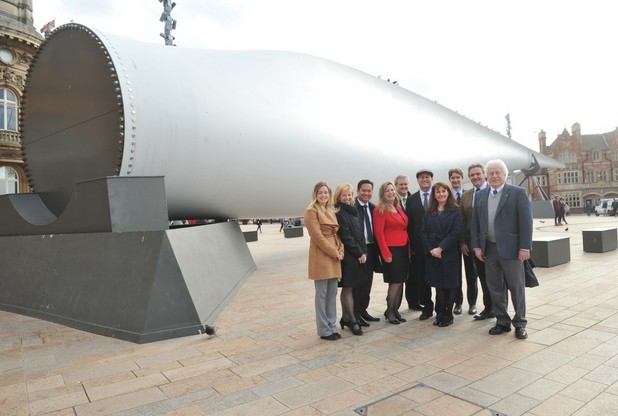 Team Humber Marine Alliance (THMA) is further strengthening the region’s links with the US.

In partnership with the British Embassy in Washington DC, the Alliance is this week welcoming the second top-level American party to visit the Humber in the past six months, wanting to learn more about the North Sea wind industry.

The nine-strong US government delegation was visiting Siemens, Green Port Hull and the University of Hull yesterday; Humber UTC, CATCH, Dong Energy and EON Humber Gateway, on the South Bank, are on today’s agenda.

Mark O’Reilly, chief executive of THMA, said: “The aim of the tour is fact-finding and gathering evidence on the socio-economic impact of offshore wind.

“They will visit offshore wind facilities, academic and training establishments and meet local authorities and businesses.

“It is also another excellent opportunity to highlight the Humber Energy Estuary as a global centre of excellence for offshore wind, and renewables generally, and that our skills and experience are transferable to the US.

“There is clearly a huge appetite in the States to develop renewables and they are extremely serious about meeting their targets.”

West Coast states Washington, Oregon and California will be represented, alongside the eastern seaboard states that formed last September’s delegation, and the state of Hawaii has also taken a place.

“The inclusion of Hawaii may surprise some – it’s more famous for surfing and palm-fringed beaches than new energy – but the US division of Statoil has submitted an expression of interest in developing offshore wind energy off Oahu,” Mr O’Reilly said.

“If you add solar power, the islands can potentially source all their energy through renewables.

“But, like the seaboard states on mainland America, they are keen to learn from our experiences.”

Tom Simchak, policy adviser on energy at the British Embassy in Washington DC, said: “We hope the trip will be as rewarding as our previous visit. Everyone was extremely positive about it.

Representatives from New Bedford, Massachusetts, have since visited the Humber and are keen to form sister city relationships with Hull and Grimsby.

THMA already has Memoranda of Understanding for collaboration in the future with New Bedford, the Business Network for Offshore Wind in Maryland and Virginia Offshore Wind.

On its home territory, THMA is now planning for its fifth annual Offshore Wind Connections conference at the Bridlington Spa, on May 3 and 4. The conference attracts UK, European and international interest.